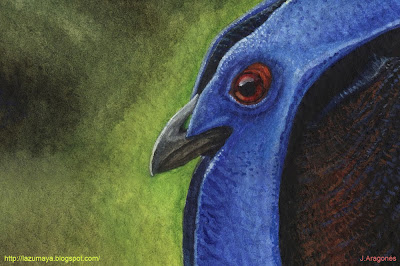 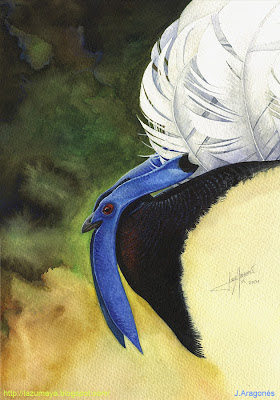 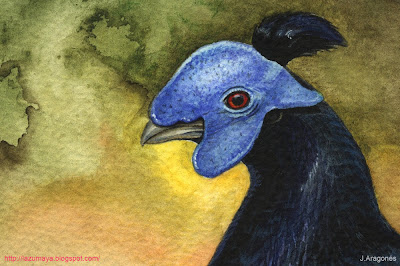 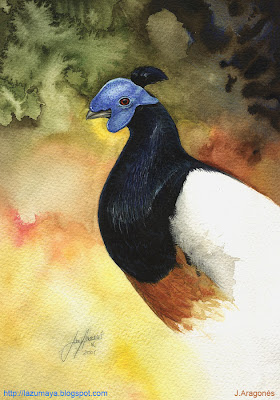 Lophura is a genus of pheasant that includes some of the most striking bird species in the world and it is not only due to their fantastic colors but also by their extravagant feathers, watles, crests and amazing courtship behavior. The two species portrayed hear are the rare Lophura bulweri and Lophura ignita. This watercolors were painted some years ago when I was working with animals in captivity in a project of environmental enrichment for birds housed in zoos and aviaries. I hade the oportunity of watching the only male of Bulwer´s pheasant that is held in captivity in Europe. Both watercolors were sold and are now hanging in the walls of private collections in The Netherlands.
Publicado por Juan Aragonés 4 comentarios: 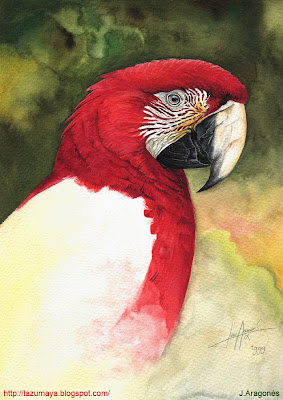 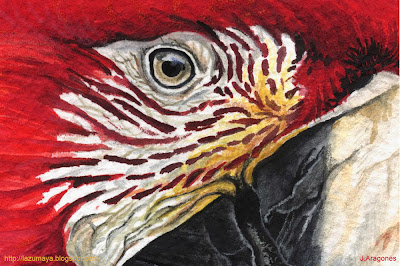 "Ten Years After" was one of my favorite rock/blues band during the 90´s. During 1997 I spend a couple of months in the rainforest of Perú, in the city of "Iquitos", and I have very good memories from that year. Lots of new birds for me in one of the most amazing places I have ever been. lost of stories to be told from that couple of months. One day, during one of my outings in the rainforest I was lucky to watch a couple of greenwing macaws (Ara chloroptera) perched in a branch over the river. During a good amount of time, I enjoyed in silence the observaction of this superb birds -the escence of tropics for me- with my old binoculars. The face of one of the macawas was tinted with yellow and I supposed that it was due to a feast of tropical fruits. I retained that image on my memories and a couple of year later, in 1990, I painted this portrait in Spain. Today, ten years after, both the macaws and the music of that great band are still on my mind ;-)
Publicado por Juan Aragonés 4 comentarios: 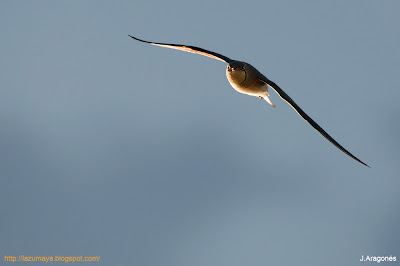 This is one of my favourite flights from the day I spend with the collared pratincoles. I got a lot of fantastic flights with great eye contact, frame filling size, nice wing pose and I am happy with them but this one... I just love the composition, the nice golden light of the evening in the undersides, the dramatic BG, the empty space and the details on the head of the bird. More than a pratincole, this guy looks like an albatross flying in open sea. Croped a bit at the right and top (about 10%) selective sharpening on the bird, a touch of saturation and levels adjustment, two RAW conversions. 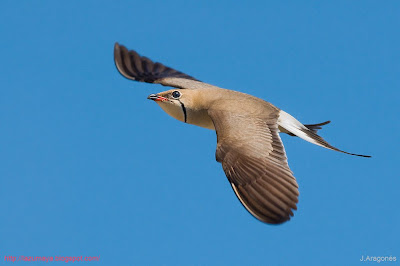 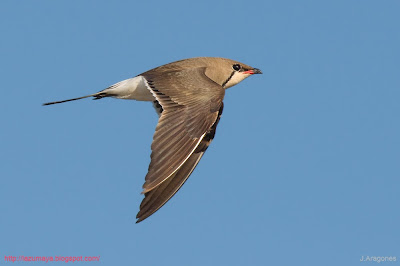 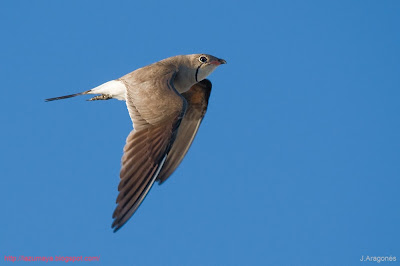 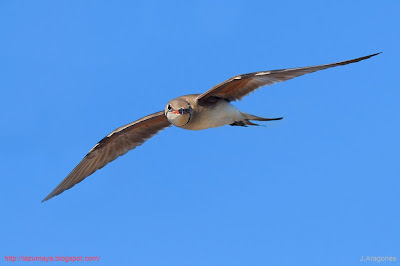 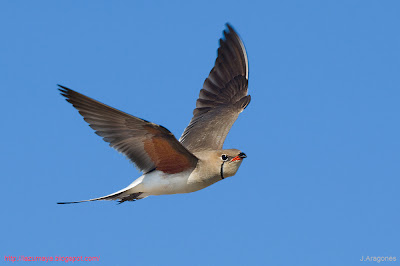 Flights with the 500VR are a real joy, much, much better than with the 300VR+1,4XTC. I handholded the lens all along the day and I returned home with a lot of keepers so I am really happy with the lens performance This is one of the flights from that day. This guys fly really fast and their flight pattern is not very predictable... in other words, they are really fun to photograph. Nikon D300, AFS Nikkor 500VR handheld ISO640 1/1250s f7,1
Publicado por Juan Aragonés 4 comentarios: 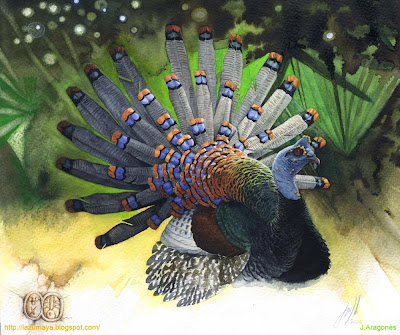 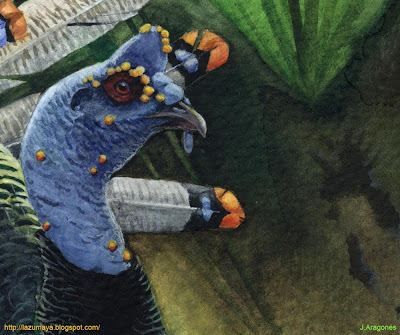 This is the final result of the watercolor and a detail of the head.
Publicado por Juan Aragonés No hay comentarios: 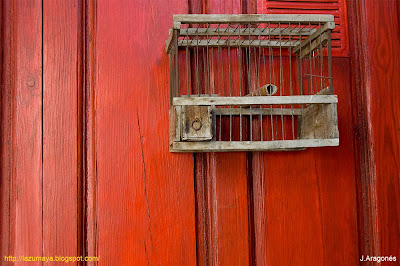 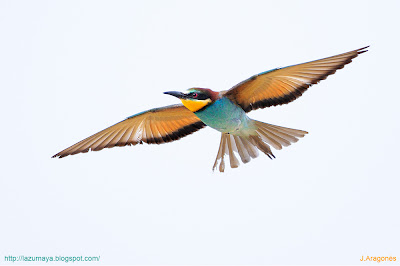 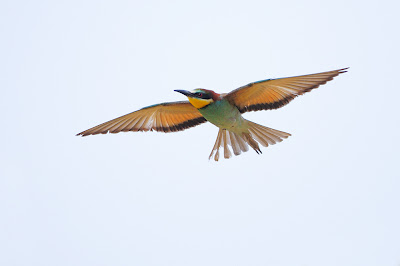 One of my first decent flights handholding the 500VR. Here you can see the original RAW file and the result of th eprocessing job
Publicado por Juan Aragonés No hay comentarios: 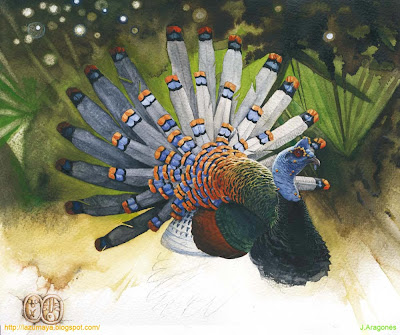 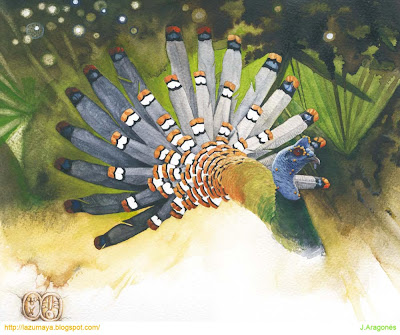 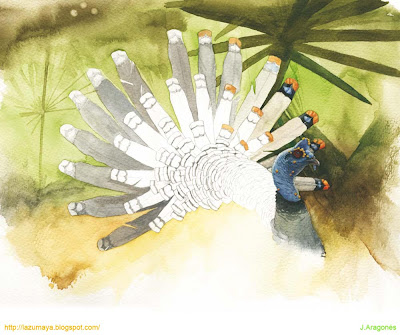 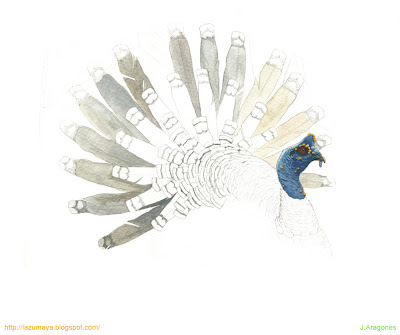 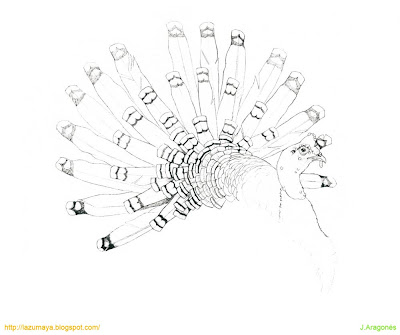 This is a painting that I made several years ago and that I think that it is my best work to date. I loved this watercolor but I sold and now is in a private collection in The Netherlands. I made several images of the creating process in order to ilustrate the different steps of a painting process: sketching, colouring and the addition to "life" to a watercolor paper ;-)

The story behind the painting and the final result on a coming post...
Publicado por Juan Aragonés No hay comentarios: 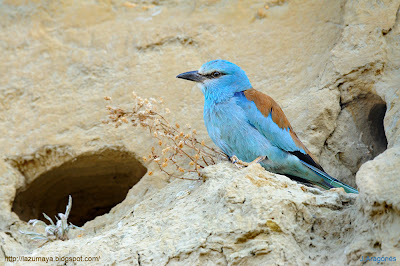 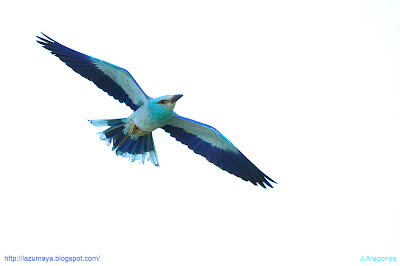 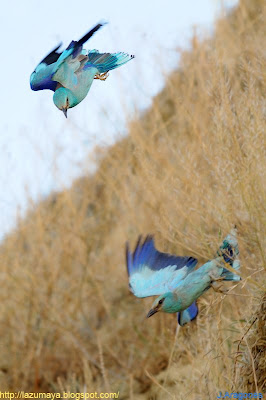 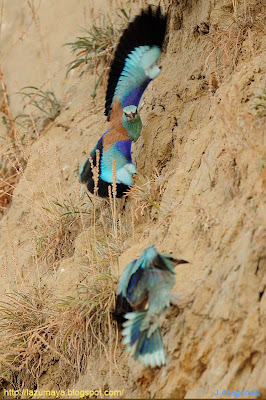 My 300VR was sold last week and I have a new 500VR on order but, until the arrival of th enew lens I have a borrowed 500VR of a friend (it is great to have good friends ) and this morning I went to try the lens with the bee-eaters. They were not very cooperative and it has been not possible to take a decent image of one perched but lots of nice flights that makes me very happy. This year, in the bee-eaters sand bank there are about three to four pairs of rollers that are visiting the old holes in th esearch for one to breed in. Very early in the morning this guy was inspecting a couple of holes in the shadows so I went up to ISO 500 and got some decent images instead of the fact that the bird was not at eye level but I am happy with this one. I decided to remove the 1,4XTC to include in the frame the holes to show the nesting habitat. I took some frames of courtship behaviour in flight. By the way, they are not breeding yet.

Sobre mí / About me